Nichole Dobo, The News Journal 12:02 p.m. EDT March 19, 2014
A Milford memorial business was named by Rock of Ages as winner of a 2014 Rock of Ages Pinnacle Award, according to a press release from the company.

"What sets our company apart is our ability to prepare and execute custom memorial personalization," Scott Sipple, CEO of Wm. V. Sipple & Son, said in a statement included in the press release. "We prepare computer designs for all of our jobs and are able to engrave any image or sandblast inscription that our customers desire. This award is a tribute to our dedication to the families we have worked with over the years." 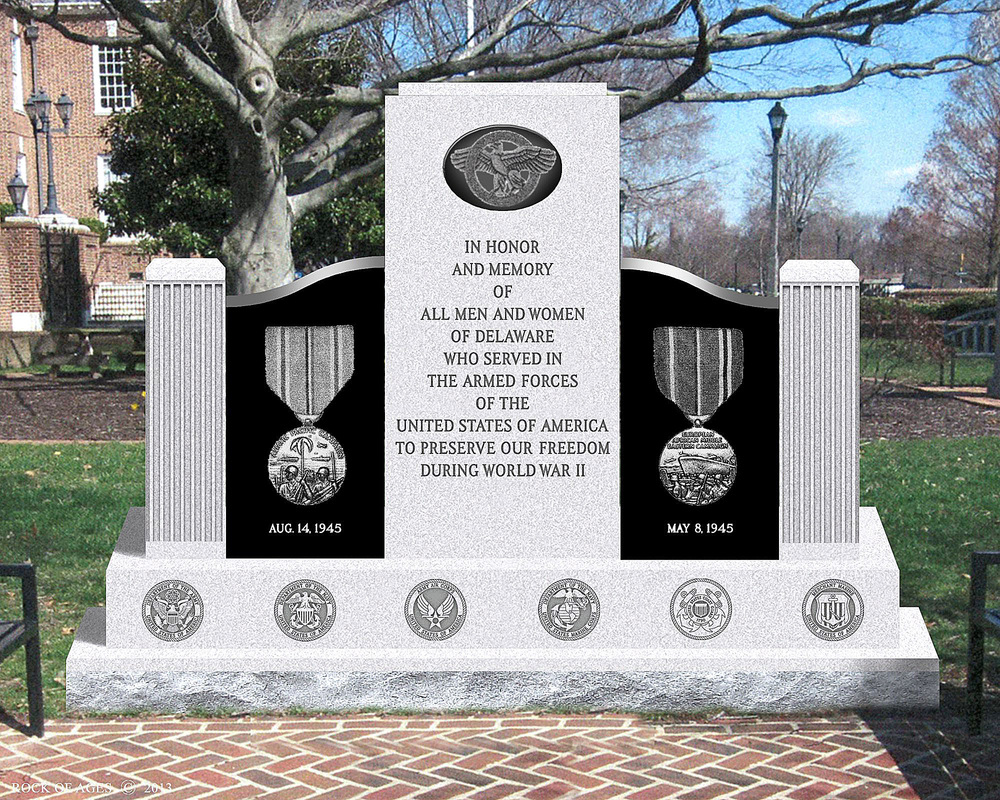 The above image is a conceptual rendering of how the World War II monument will appear in front of Legislative Mall in Dover. Scott Sipple listened to the ideas of a committee and came up with the design for the granite monument. The Rock of Ages company in Vermont will soon have it finished and ready for shipment to Dover.
Korean War Memorial dedicated in Dover

Local veterans and dignitaries gathered at the Kent County Veterans Memorial Park in Dover Sunday to dedicate the new Korean War Memorial. The monument, made of black granite, is cut in the shape of the state of Delaware. (Special to the Delaware State News photo by Doug Curran)
Updated July 27, 2014

The Korean War has sometimes been called “Forgotten War” or the “Unknown War” because of the lack of public attention it received.

But on Sunday, veterans marked the 61st anniversary of the cease-fire between North and South Korea by dedicating the new Korean War Memorial at Kent County Veterans Memorial Park in Dover.

The ceremony, hosted by Vietnam Veterans of America Kent County Chapter 850, paid tribute to the men and women who fought in the war.

“We thank the Vietnam vets so much because they really did all the work,” said keynote speaker Daniel Coons, a Korean War veteran who served as an U.S. Army intelligence analyst.

Dave Skocik, president of the Delaware Veterans Coalition and a member of the local Vietnam Veterans of America chapter, said plans for the monument started about a year ago.

Over the years, he said, they had discussed the idea, and then George Goss, immediate past president of the Delaware Korean War Veterans Association, said he wanted to press forward with the monument.

“Dave, you guys have done one heck of a job for us, I’ll tell you,” Mr. Goss said in his remarks.

“I have wanted a monument in Dover for years, and we finally made it, thanks to you guys. Thank you very, very much.”

The monument, made of black granite cut in the shape of Delaware, is modeled after one in Georgetown. An inscription reads: “In honor and memory of all Korean War veterans who served and died for freedom.”

The Vietnam Veterans of America chapter helped through the sale of bricks and contributions, Mr. Skocik said.

“It’s amazing (the amount of) people who get up and write a check just because,” he said. “It’s so nice when you get a surprise check somebody sends on in.”

The new memorial ensures that those who lost their lives in the Korean War are not forgotten.

“...I now have a place when I want to remember buddies,” Mr. Coons said, starting to tear up. “I can come sit here and remember all the wonderful parts and the bad parts.”

Mr. Coons also founded the Airway Science Program at Delaware State University. From 1977 through 1987, he served in the U.S. Coast Guard Auxiliary as a command pilot and division commander flying interdiction and search-and-rescue missions. In 2011, he was inducted into Delaware Aviation Hall of Fame.

“You have no idea what it was like to come home from war and just be totally ignored, or rotten teenagers say nasty things to you while you’re in uniform, after coming back and watching your buddies die for them,” Mr. Coons said after the ceremony.

In his remarks, he recounted difficult battles and ticked off the elements of the United State forces that served in the Korean War, and the casualties they sustained.

“As this wonderful monument and wonderful memorial proves, we are not forgotten,” he said. “May God bless our country and God bless America.”

At the close of the ceremony, the names of 11 Kent County men who died in the war were read aloud, a bell rung after each name.

The memorial park on South Little Creek Road is already the home of the Vietnam Memorial and the Gold Star Mother and Families Memorial. Plans are in the works for a memorial for veterans of Middle East conflicts.

“Parks like this tap into many people out there that you’re not even aware of,” Mr. Skocik said.

“Even people who have never served, if they knew someone or they want to be a part of it, they want to honor those who serve.”

A form to order inscribed bricks at the site is available at www.DelawareVVA.com and click on the memorial link, or call 697-8384 for more information.